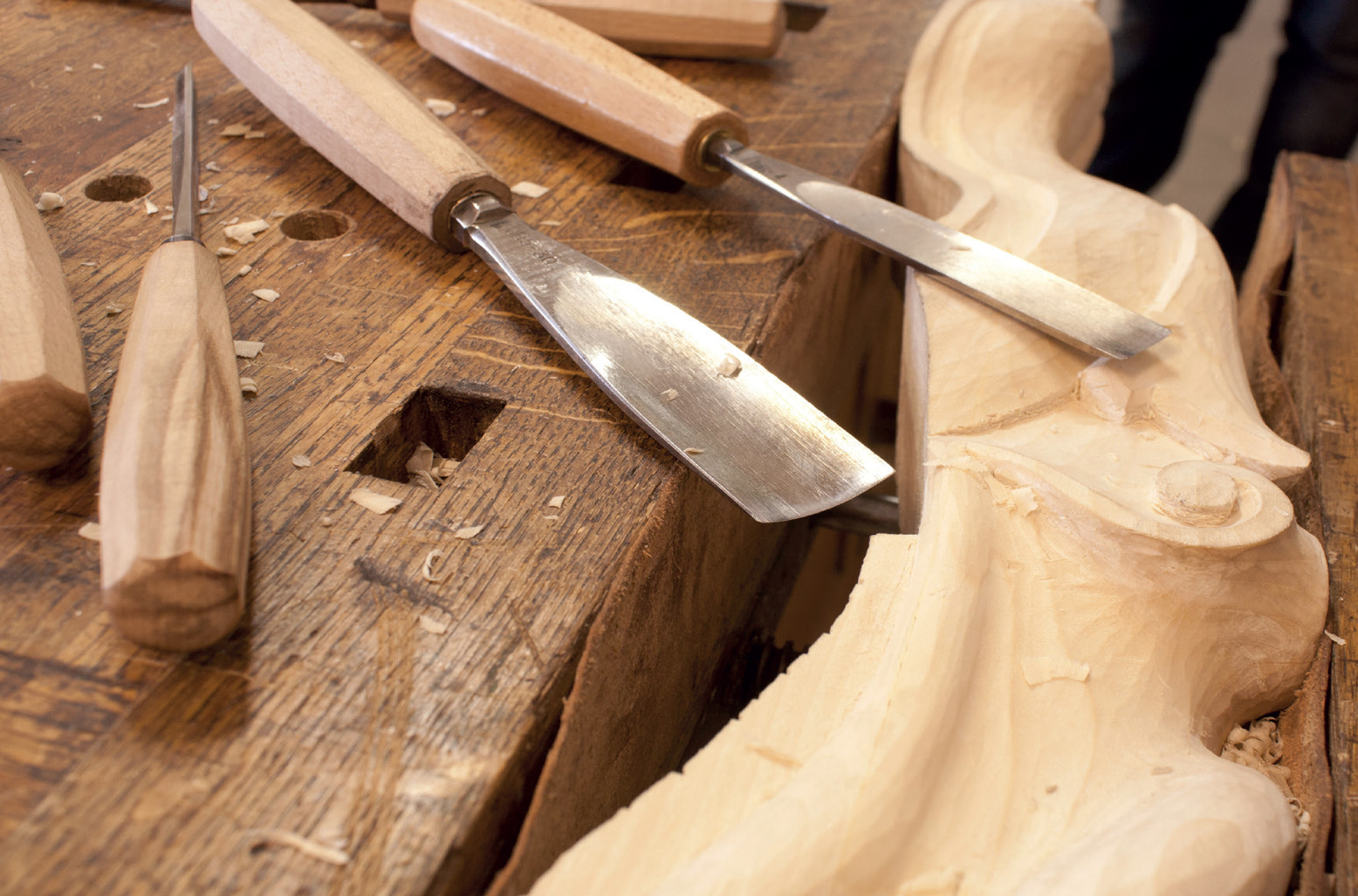 We think B&B Artigiana in Olgiate Molgora is amazing the way it has doggedly built a name for itself in the world of handmade rasps. It recently added a number of new tools to its product range, focusing on carving and sculpting. Since we’re huge supporters and enthusiasts for Made in Italy, we felt we absolutely had to test their gouges. The set we’re looking at here has five pieces. Two medium-sized gouges for removing wood and finishing (no. 5, 30 mm and no. 4, 15 mm), one for taking away wood (no. 9, 10 mm), one that is a v-parting tool (5 mm)  and another, also for detailed work, that is 6 mm (no. 8). Each tool comes with its own transparent plastic tube that has caps for a hermetic seal. This is an excellent way for transporting such tools and prevents any damage to the metals from unwanted collisions. To be honest, for the workshop such storage is not overly practical, but a hermetic container isn’t a bad option if your tools are kept in damp or humid conditions.  By looking closely at the blades, you can see they are handmade. Each one starts life as a bar of metal that is flattened and then shaped in a press before being finished by hand and sent for hardening. The gouges produced by the company are ready to use, with a handle attached and hand sharpening already done.

Gouges start as a bar. The initial hammering followed by pressing into shape improves the metal’s qualities. Such metal has a crystalline structure that, through stretching and compression, becomes more compact and oriented such that both elasticity and hardness improve. 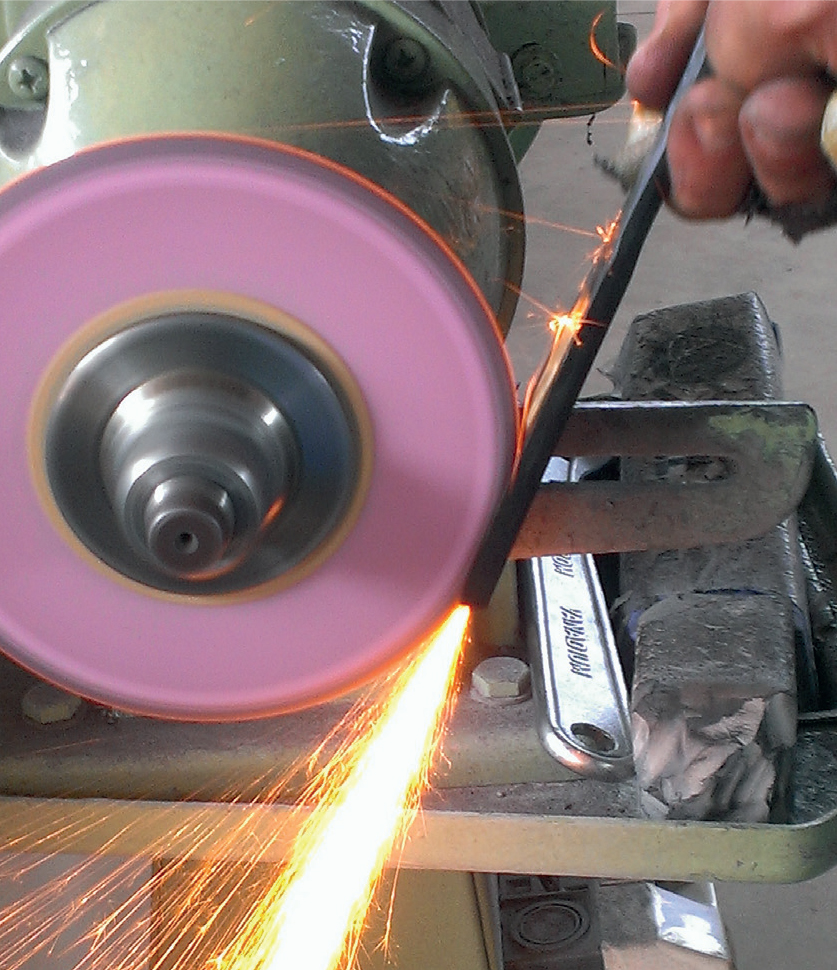 Grinding the inner part is done by hand. This is a particularly delicate phase because incorrect work can make the thickness less uniform and disrupt the symmetry of the blade. But it is also an essential part of the process to make special or customised products. 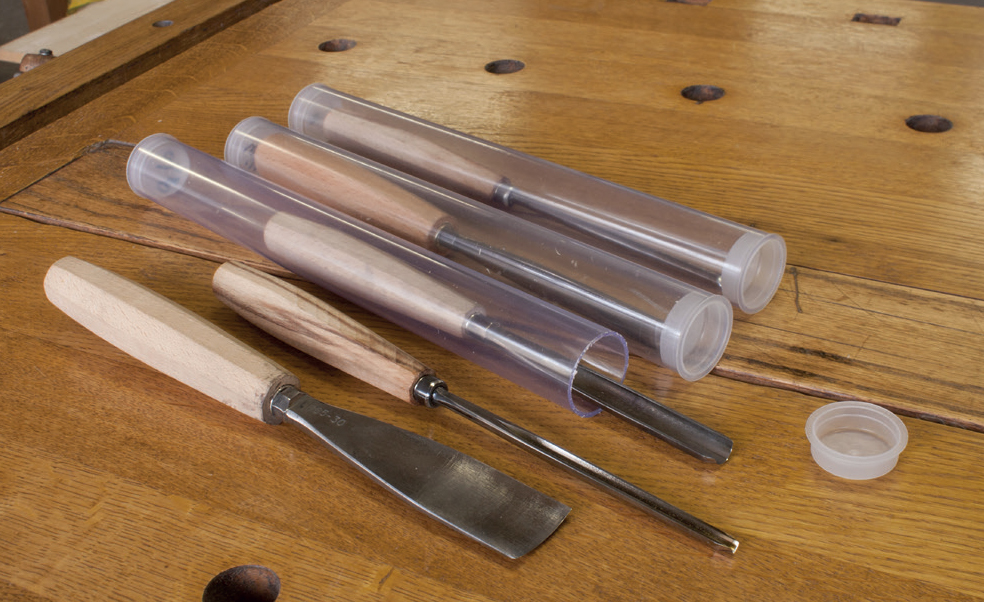 The practical transparent containers are a useful addition for transportation without the worry of the tools being damaged. In a workshop, these containers can be used to prevent damage from damp. 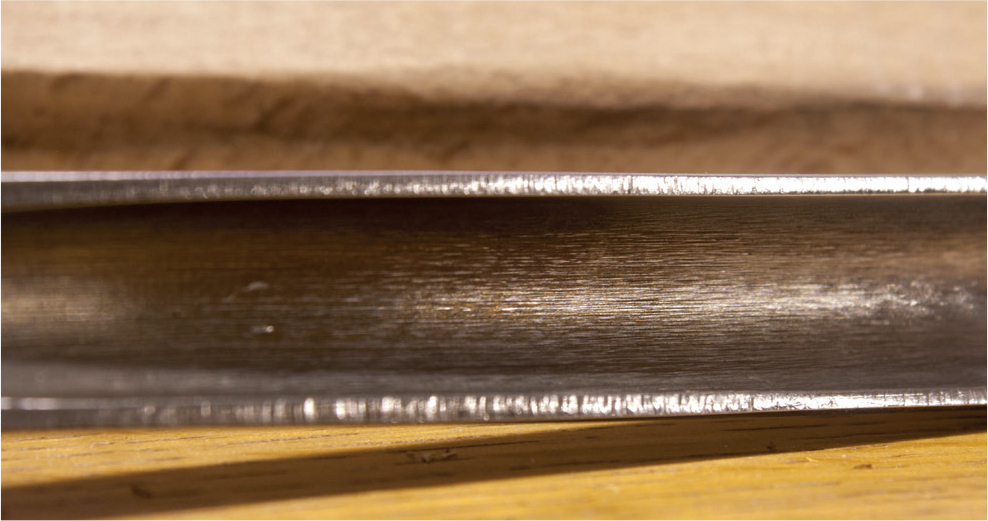 On the inner face of some of the tools, you can see traces of the milling on the grindstone. In truth, any such grooves are extremely subtle and, after the first few times the tool is sharpened, they disappear near the edge.

This was actually part of the first test we did, just after taking them out of the package. We took a scrap piece of lime wood  and made some cuts across the grain. Lime wood is pretty good for carving, of course, but it is also soft enough that cross-grain cuts clearly show any defects in the tools being used. Each of the five tools being tested held up very well in this test, and we were able to get long, clean and compact slivers. This is not something we care about much per se, but an inefficient cutting edge struggles to get through the wood, leaving “crumbling” on both the piece and the scrap wood. 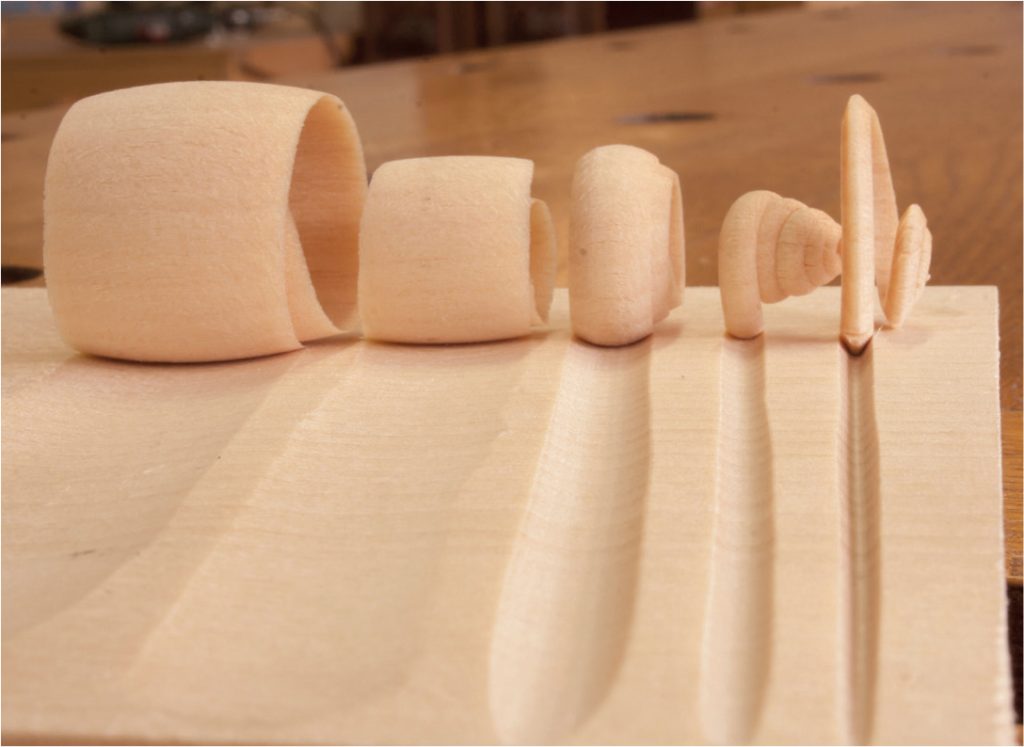 The cutting test. These wooden “shavings” really show how efficient a blade is. A gouge that moves easily through the wood will produce unbroken, curled wooden slivers. Another test is to look at the edge of the grooves. If they are free of chips or damage, it shows the tool has been sharpened properly.

These blades are 12 to 13.5 cm. These sorts of number are pretty much standard for professional gouges. The ones in our set were straight and generally well finished. The inner side does have some traces – micro-grooves – from the grinding. But, we couldn’t see these actually making any difference for how these tools perform and it is perhaps due to the steel being nicely hardened to 59-61 hrc. The handles are proportional to the size of the metal part. So, the gouges that will be for heavier duty work are more robust, with the others, thinner.  They have an octagonal shape and are made of beech wood that has not been varnished. This makes them more comfortable to hold and less likely to slip in your hand. The final thoughts to add, prior to trying them for a longer period, are about the regular nature of the grooves. It’s actually an important detail because it influences the ability to sharpen the bevel smoothly. On a gouge with irregular sides, the cutting edge would be longer where there is more metal, and shorter where it is lacking. Such blades have a cutting edge with bumps and dips, and can even become unusable in some cases. In general, this test is done for V-shaped and U-shaped gouges as they require more demanding machining. In both cases, the tools we received did not have any defects or anomalies.

The blades are long and straight while the handles taper slightly towards the tang, offering good grip for use both with a hammer and by hand.

The walls of the gouges were of regular shape and thickness. For the V-shaped gouges, the inner part of the V is slightly rounded. This isn’t a problem when using them, but it does require careful sharpening to make sure the bevel has the same shape.

We didn’t do the standard tests on this gouges, as we decided it would suffice to use them for ordinary carving work over a number of months. We used many different types of wood, with very different properties, over this time. Some were soft, such as lime or tulipwood; others were hard, such as walnut, mahogany and yew; and others were very tough, such as chestnut and ash. The blade performed well both when roughing out wood and in finishing.

The angle of the blade from the company was about 25°.  This is a pretty good balance between durability and cutting ability, although one needs to take a little more care with hard wood. For those who really like working with such wood, we’d go for 30°. The shape of the edge seen from above also looked well made, except for no. 4, which was a little concave.  This was easily resolved by sharpening it again, to get the classic slightly protruding shape. Focusing on the cutting ability of the blade, we can say the information from the maker was reliable. The edge remained in good condition for quite a long time, without any cracks, chips or folds appearing.

In honesty, we were a little worried about just how long the blade was lasting, imagining it would be a nightmare to sharpen again. But, when it was finally time, it didn’t really take any longer than normal. The largest gouge, the 30 mm one, was brought back up to scratch in a few minutes using a medium-grit stone (1200) and a fine grit one (2000).

In conclusion, we can say the gouges from B&B ARTIGIANA really do represent what we think of as Made in Italy. 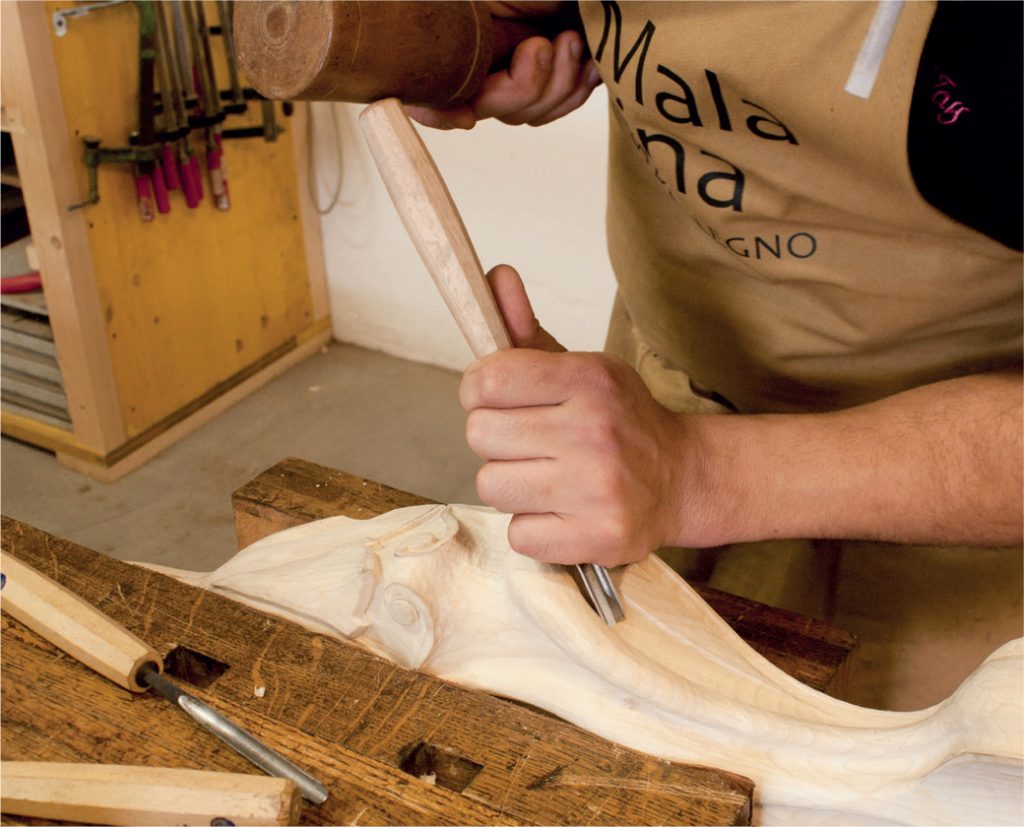 The blades proved to be durable, even in long roughing jobs and the edge wore constantly, without any of the abrupt changes one finds with poorer quality tools. 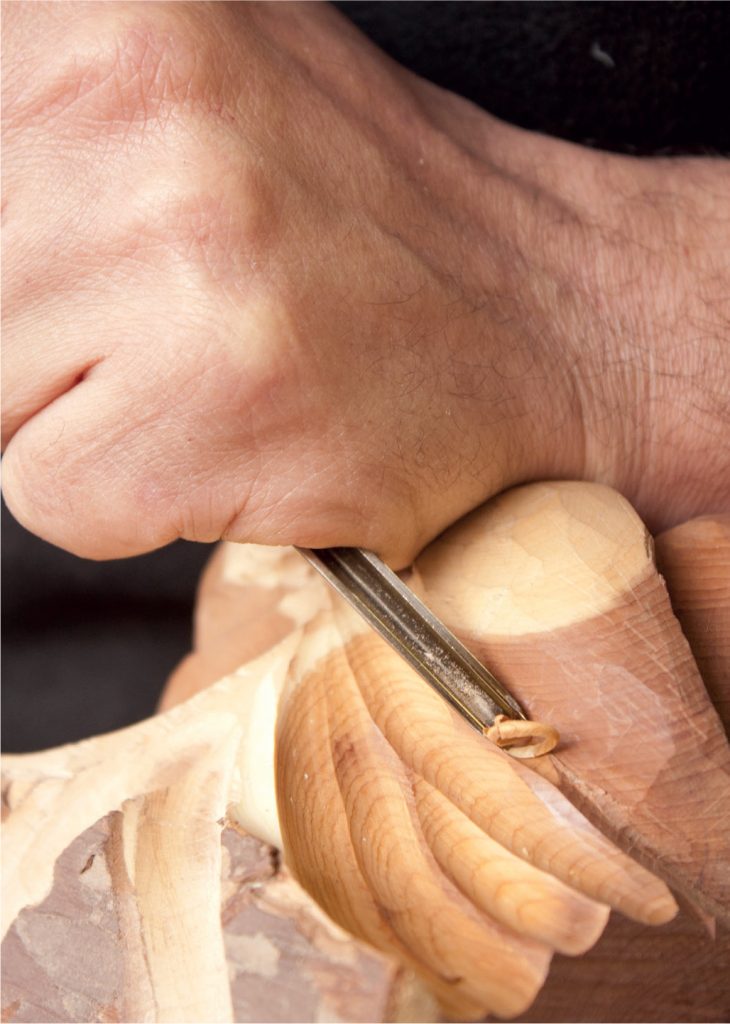 This is a picture of a piece of yew being sculpted. Such wood is of medium hardness and quite likely to splinter. The grooves are clean with sharp contours. 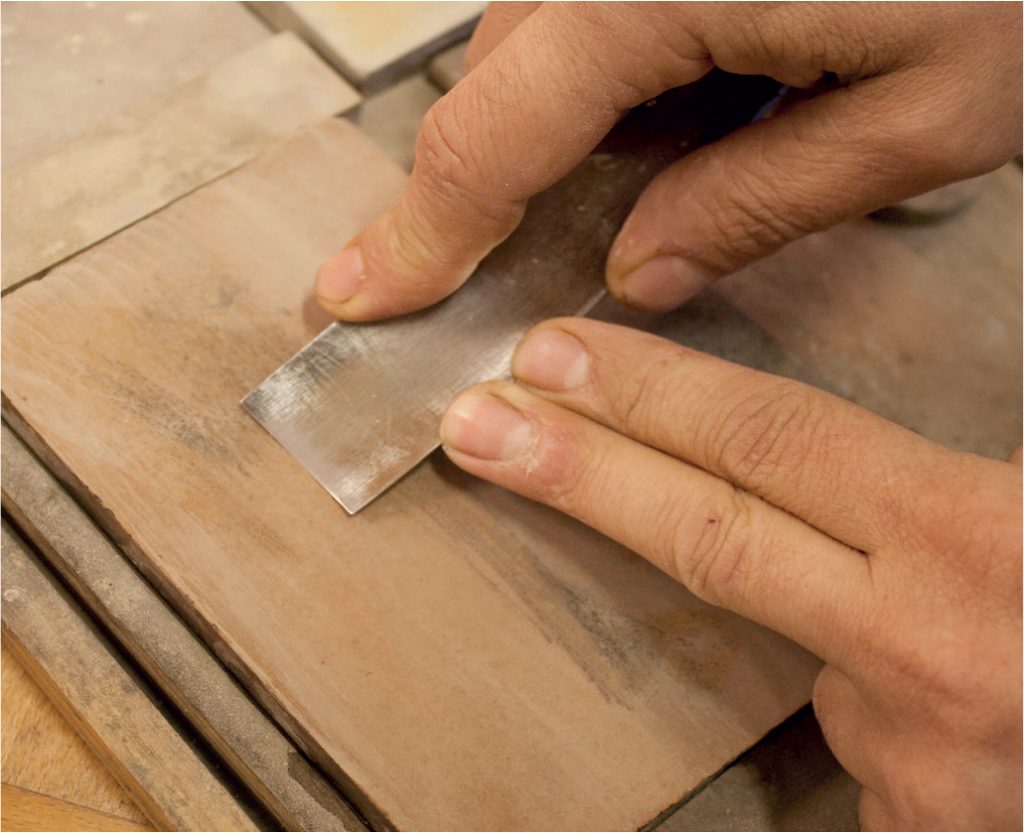 Keeping the blade in shape didn’t require any particular amount of time, despite the hardness of the metal. For ordinary sharpening – for use in carving –   a 2000 grit finishing stone followed by some abrasive paste on a leather strop is a good solution.  For heavier work, a water grinder or a more aggressive stone is best.